Help for English speakers to find the right phone plan with your first month offered.

Help for English speakers to find the right phone plan with your first month offered.

Hello to you all,

Having problems with the understanding of French language?

There are actually 4 phone plans on the market today if you decide to choose R=D by SFR ™.

You have to consider a certain number of advantages that only R=D by SFR™ offers.

1. Lowest rate phone plans on the market using the most reliable network in France and abroad that include free roaming inside the European Union.

R=D by SFR™ is the only communication operator in France that makes it possible! Then it can be a very good deal if you have time to sponsor people and you will use the excellent SFR network with top speed 4G and 4G+ in France but also abroad simply because SFR has agreements with foreign networks worldwide.

How does it really work?

First step you have to decide your needs... If you need unlimited calls or not.

1. If you have few needs and you want a very cheap phone plan without having to need a lot of data then you should probably choose the phone plan at 5€ per month offering 5 hours of domestic calls and texts with only 50 MB of data that can be used either in France or inside the European Union if you travel. After 5 hours of calls you will pay 0,38 € per minute. The extra MB costs are available in the link below.

For example if you are located in Germany your texts and calls in your phone plan will be included to any European Union phone number either mobile or landline but not if you are in France.

If you are in France the rule is only domestic BUT if you are abroad in a different European Union country then your texts become unlimited to any European Union destination phone number.

This may be silly but this rule was voted by the European Union Parliament.

Keep this rule in mind for all phone plans... This rule is not specific of the R=D by SFR™ operator, all operators in the European Union do the same thing.

2. If you need unlimited domestic calls and texts then you can choose  among 3 phone plans that are slightly different. The choice will vary again: how much data you need and where your travel needs are.

Now there is an example of a limited time offer: a cheap phone plan that will cost you only 10 € per month and will offer unlimited domestic calls and texts with 40 GB in France and 3 GB if you travel inside the European Union. But you have to be careful if you don't want to pay an extra cost : if your usage is more than 40 GB in France then you will pay a 2€ per 100 MB package... you will blocked after 4 consecutive usage of that same package that will be automatically ignitiated if you go beyond your 40 GB. It means it can cost you 18 € if you are not careful. (10+2+2+2+2=18).

You really have to understand that subtile European Union rule if you don't want a bill explosion.

Then comes another phone plan costing 15 € per month that comes along with unlimited domestic calls and texts to any domestic mobiles and landlines phone number but not to phone numbers outside of France, (see destinations below) you will have unlimited domestic calls and texts and 15 GB of data. After 15 GB your will surf the internet at a lower speed without having to pay and extra cost but your speed will be as slow as on 2G network...  The specificity of this phone plan resides in the fact that destinations like the European Union, Switzerland, Andorra + the USA and Canada are included in this plan when roaming. Again be careful of a fair use policy abroad because after 15 GB you will pay 0,005 per MB if you use the entire package of your 15 GB and more if you are outside the European Union. That may appear complicated at first but you have to keep in mind that the USA Canada Switzerland and Andorra do not belong to the European Union therefore the cost if you go beyond 15 GB will be a lot more than if you were traveling inside the European Union. Usually 9,24 € per extra MB in America, 0,24 € in Andorra but 1,98 € in Switzerland. All tarif zones abroad are at your disposal if you click on the link below:

Be aware that all worldwide roaming zones do not cost the same price and you will pay your calls, texts and data at an extra cost depending where you are in the world with a cost per minute per text and per MB. Only destinations like the European Union, the United States, Canada, Switzerland and Andorra are included in this plan offering unlimited calls, texts and 15 GB of data but respect the limit of fair use policy established by the European Union Parliament in June 15th 2017.

If you stay in France your are ok as after the 15 GB limit you will surf the internet at a lower 2G speed.

Be aware that the European Union Parliament has established a fair use policy when roaming for free. There are 2 rules you must follow:

In a consecutive period of time of 4 months your presence outside of France must be no more than 2 months in a foreign European Union country AND/OR your usage of calls, texts, and data must not be higher than your domestic local consumption of minutes, texts and data. European Union law! Full period!

Now you have all the keys to be a serious careful person that can do almost everything unlimited if you follow the rules above.

Now if you want your first month for free, I can provide promo codes via a friend who will respond your email instantly with your free code.

Click here and send a message to get your personnal free code immediately.

Promo codes for mobile plans are on the left, they all start with a PARMO something (followed by 5 letters and/or numbers) copy and paste the code when you choose your plan as the letter O can be taken for a zero...

Promo codes for personnal wifi devices with a landline are on the right, they all start with a PARFI2 something (followed by 5 letters and/or numbers) again copy and paste the code when you choose your plan as the letter O can be taken for a zero...

Thank you to you all English speakers in the world to choose one of my promotion code.

I really do appreciate the English community visiting this forum.

One last thing and you are ok. Plans are all engagement free, meaning you free to stop or switch to another French operator and keep your phone number at any time by calling the RIO number, this phone number can be reached when dialing 3179. It will tell you your RIO number in order to switch from an operator to another one. If you do not understand this number do not worry you will get a text message right after hanging up.

Eventually, in order to pick up the plan of your choice, you have to have a French bank account number: foreign IBAN numbers are not accepted yet for a subscription. Sorry for that.

You also have to know that it is impossible when roaming to pay more than a 60 € extra charge. Why? Simply because the European Union Parliament voted that law to protect you and avoid you from having a big extra payment on your bill.

Thank you very much again.

I have a RED-SFR SIM at 5euro. Can I add a data top-up for one month usage in France?

You have to set it up in your phone's settings.

It's not a RED SFR setting.

I was recently contacted for fibre Wifi offer from you. I dont really understand the offer as the lady was explaining to me in French. Can any of your English speaking customer service agent call me to explain the offer. You can refer the offer - It is in 'my contracts/my orders' in my profile. I need to understand the details before i disconnect with my current provider.

Thank you for contacting me at your earliest.

You are on a user's forum and no one have access to your datas/contract.

The customer service is not interacting here.

Feel free to ask your questions. Maybe we can answer.

Hi, I have internet with SFR (Now very expensive) and I want to change to Red (Good value), how do I do this.

Going onto the SFR website an selecting 'Change offre' only give me the one SFR option and no option to change to Red.

If you're talking about SFR box, I'm sorry but it's impossible to change SFR box contract into a RED box contract.

Consequencies that you've to know are :

- loss of your landline number

- cut of internet connection for 2 days to 3 weeks

The best way to have a cheaper contract is negociate with SFR termination service by phone. You can keep your current contract with SFR, keep your landline number, don't have a period without connection, and no fee.

Hello, in the text at the top there seems to be conflicting information regarding the extra price once the 15GB data is used up. I'm in the US and get messages from RED by SFR that it will cost me a whopping 9.24 euros for every MB that I'm above those 15GB (this seems to be the price called "SFR Voyage"). However, in the terms on the page here and in other documentation in French it says that I'd only pay 0.005 euros per additional MB.

Can somebody resolve this conflicting information? 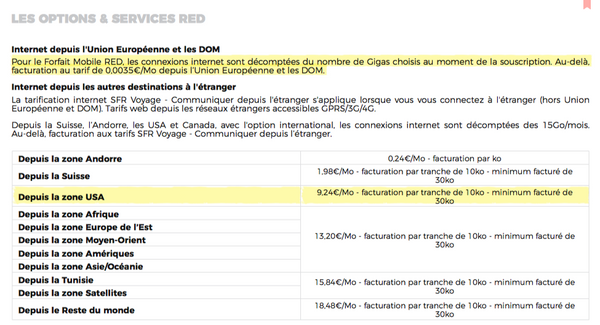 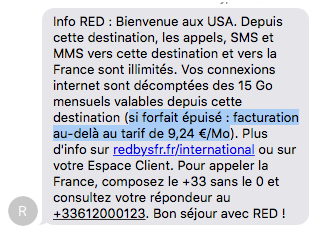 There's no conflicting information, the text message you received shows the price you will pay beyond the 15GB package :

Prices after the 15GB package are :

But I admit the sentence you highlighted in yellow seems to be cut somewhere :

Instead of "after the 15GB you will pay 0.005€ per MB if you use the entire package of 15 GB if you are outside the European Union"

You should read or it should be written :

"after the 15GB you will pay 0.005€ per MB if you use the entire package of 15 GB if you are inside the European Union but much more if you are outside the EU"

This makes sense with the sentence that follows:

"it may appear complicated but you have to keep in mind that USA / Canada / Switzerland / Andorra do not belong to the European Union therefore the cost if you go beyond 15 GB will be a lot more than if you were traveling inside the EU."

Then if you're in the USA, don't go beyond the 15GB package, it will be very expensive!

Have a nice day